The diagram illustrates the cortical homunculus. The cortical homunculus visually portrays the anatomical divisions of the primary motor cortex and the primary somatosensory cortex. The word “homunculus” comes from the Latin word which translates as “little man”. It represents how our body is perceived within the brain and how the neurons are distributed in these areas in order to create this perception. What immediately stands out is that the size of a body area is not proportional to its representation in the cortical homunculus – certain areas such as the hands, lips and face occupy disproportionately large areas of the cortex, due to the importance of fine motor skills and and the extensive innervation of these areas. Knowledge of the cortical homunculus can help to explain the pattern of motor and sensory symptoms in patients who have suffered a stroke. The middle cerebral artery, broadly speaking supplies the lateral cerebral cortex. Looking at the cortical homunculus you can see that the lateral parts of the cerebrum in the motor and sensory cortices represent the upper limbs and facial structures. Occlusion of the middle cerebral artery therefore, can lead to contralateral paralysis/paraparesis (weakness) and/or sensory loss of the contralateral face and arm. The anterior cerebral artery, on the other hand, supplies the medial aspect of the cerebral hemispheres. You can therefore infer from the cortical homunculus, that occlusion of the anterior cerebral artery can lead to sensory and motor deficits in the leg and foot. Learn more about the anatomy of the brain in this tutorial, and learn about the blood supply to the brain in this tutorial. 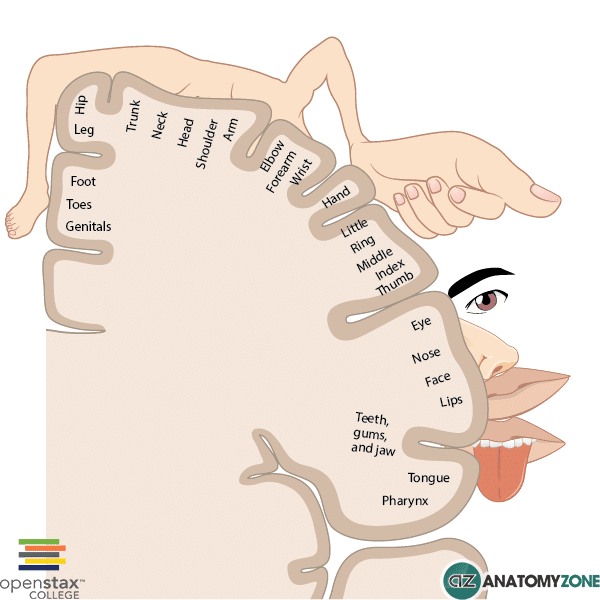