The structure indicated is the corpus callosum of the brain. The corpus callosum is a bundle of neural fibres which connects the left and right hemispheres of the brain, and is the largest collection of white matter in the brain. It is one of five commissures in the brain. A commissure refers to nerve fibres which cross the midline at their original level. This differentiates a commissure from decussation, which is when neural fibres cross at a different level to their original level. The five commissures of the brain are as follows: The corpus callosum lies beneath the cortex at the longitudinal fissure, and consists of four parts: The genu lies anteriorly, the splenium lies posteriorly, and the body lies between the genu and the splenium. The rostrum of the corpus callosum projects posteroinferiorly from the genu. In severe, refractory epilepsy, a procedure called a corpus callostomy is sometimes performed, where the corpus callosum is dissected and the right and left hemispheres are thus disconnected. This thereby prevents the interhemispheric spread of epileptic activity. However, as the left and right hemispheres are unable to communicate, interesting phenomena can develop as side effects, such as alien hand syndrome, where a person’s hand seems to take on a mind of its own, moving without the conscious awareness of doing so, often requiring the person in question to restrain the “alien hand” with the hand over which they retain conscious control. Learn more about the basic anatomy of the brain in this video tutorial. 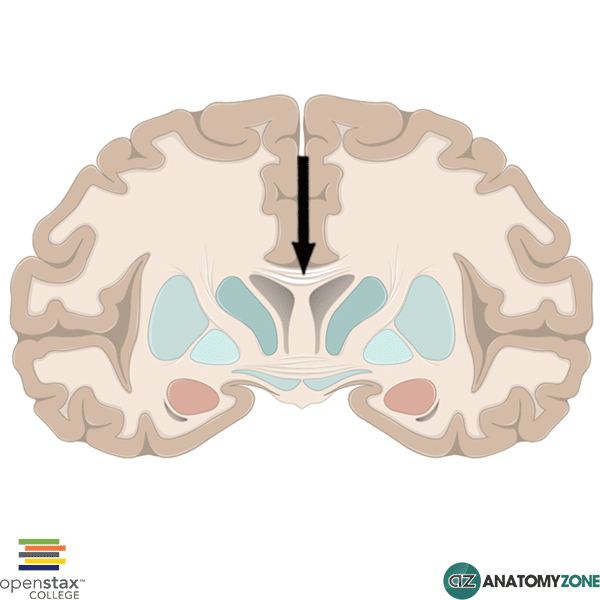