This structure is a bipolar neuron. Neurons can be classified according to the number of processes that extend from the neuronal cell body (soma). There are three main types of neurons found in humans according to this classification: Unipolar neurons, as the name suggests, only have one process emerging from the cell. Humans do not have true unipolar cells, but instead have pseudo-unipolar cells. An example of pseudounipolar cells in humans is that of dorsal root ganglion cells. They are called pseudounipolar cells because although one process extends from the cell body, this single process then divides into two, with one end extending from the periphery (sensory receptors) and the other end extending to the central nervous system (spinal cord). In this way, a sensory stimulus is transmitted from peripheral sensory receptors to the central nervous system for conscious perception and processing. Bipolar neurons, have two processes emerging from the cell body. They are specialised sensory neurons involved in the transmission of special senses. Examples of bipolar neurones are the ganglia of the vestibulocochlear nerve, and the bipolar cells found in the retina. Multipolar neurons, have several dendrites extending from the cell body, and a single long axon. These types of neurones are constructed in such a way as to allow immense connectivity and networking with other cells. As such, they form the majority of neurones in the brain and account for the extensive interconnectivity allowing higher cognitive processes to take place. 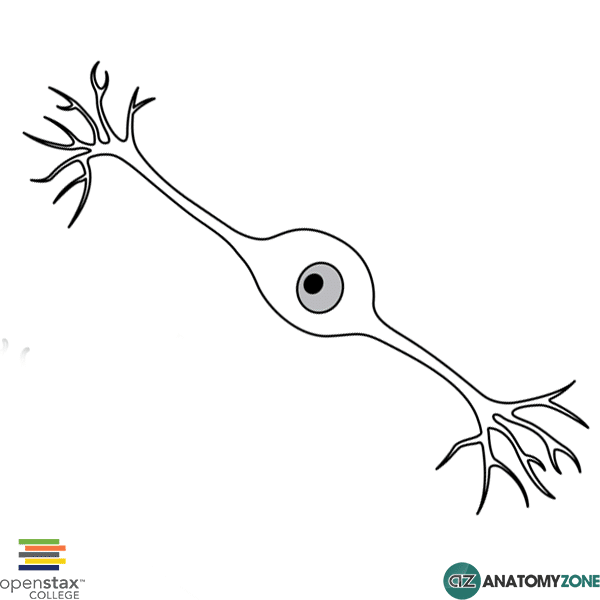